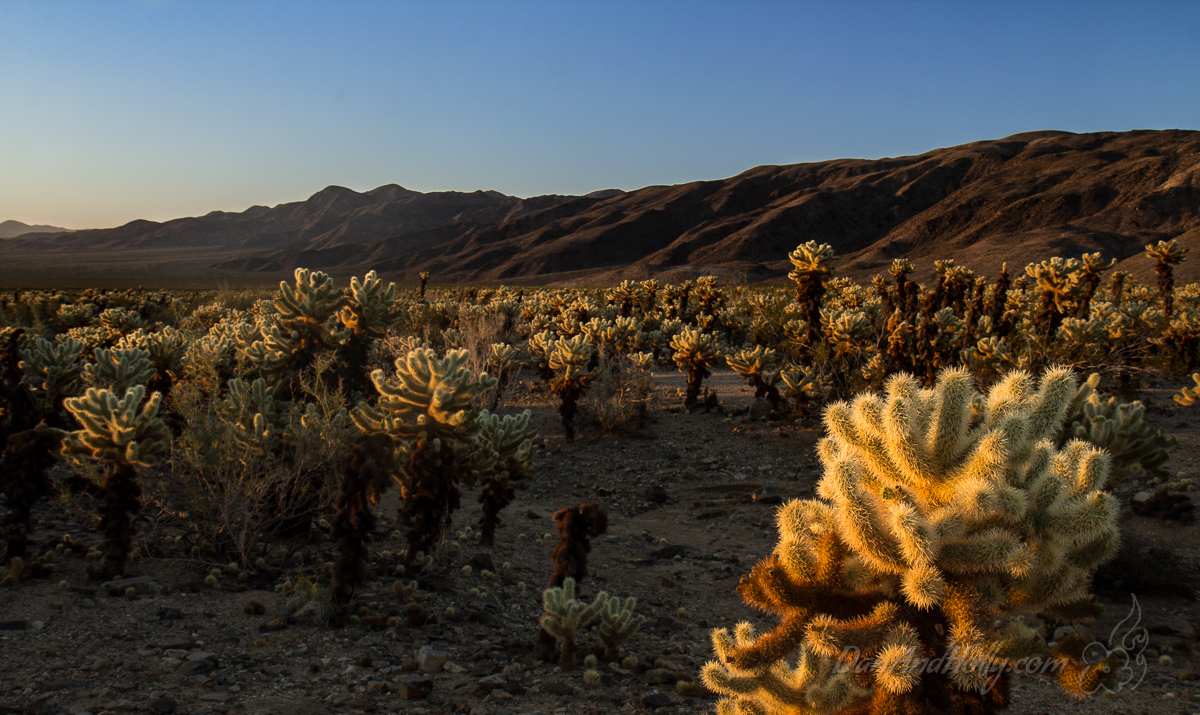 I started this series on Joshua Tree National Park with a sunset image, and as promised, I’m ending it with a sunrise image. This week’s Picture of the Week is from the Cholla Cactus Garden, which is located out Pinto Basin Rd, almost smack dab in the center of the park… and is EXACTLY in the middle of nowhere! I don’t remember exactly what time it was that Holly and I left the hotel, but it was well before first light. A park ranger had told me that it was a great place to see the sunrise, but I failed to ask how far it was. We drove and drove and drove… to the point that I was beginning to worry if we’d make it before the sun came up, and I was also beginning to worry that I’d even recognize it in the dark if we did make it! Luckily though the area was clearly marked with a sign, and we did make it right around first light.

I feel like I’ve mentioned this before, but when I shoot a sunrise, I always like to be in place before first light. This generally drives my friends crazy because it requires getting up earlier than normal, but I do it for a reason. First of all, I love the thin line of light that happens on the horizon just at first light. You can get some really interesting images at that time and you can generally work in some stars to the shot as well. Also, if a sunrise is going to have good color, deep reds are the first to appear, and if you’re angling to be somewhere just for sunrise (and not first light) you might miss this part of the color spectrum. Finally, when you’re there that early, you can usually get an idea if you’re in for good color, and if not, you can start working on plan B for the morning. This was the case on this particular morning. The sky was clear as a bell, and the humidity was SUPER low… no chance for color in the sky, BUT, that’s the fun part about the Cholla cactus!

The Cholla cacti are covered in tons of these really blonde needles, and when the sun hits them at really low angles, they almost appear to glow. The thing to do is work at angles with the rising (or setting) sun, and watch the magic happen. Now, the other thing about those needles is that they are REALLY sharp… and according to the signs, incredibly painful to remove. Apparently they have these microscopic prongs aiming backwards, so that when you go to pull it back out, they dig in deeper. Not cool! Luckily there is a maintained path at the gardens, but you still need to pay close attention, especially in the dark! I had my hiking shoes on and accidentally kicked a very small one on the ground; I was able to shake the body off my shoe, but it required pliers to pull out the needles that were left behind! Definitely not something you want in your arm or toe.

Well that’s all for Joshua Tree this go around. I had planned to keep working through my images in chronological order, but instead of continuing on with Southern California, I think next week POTW will return home to East Tennessee. We had such a beautiful Autumn here, and I’m excited to share some of my pictures… at the rate I’m currently going it would be next Spring before I got to them!

POTW: Beauty of the Night Sky

POTW: Lighting Up the Night