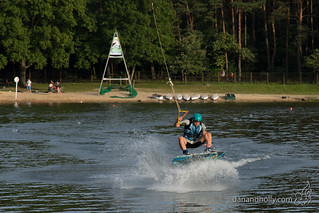 My buddy Nico had been telling me about this cable park in Szczecin where he lives for some time now, so when Holly and I went back to Poland this past summer he was adamant that we go… and it was a BLAST.  This was the first cable park I had ever ridden at, so I wasn’t sure quite what to expect, but once you get used to the turns on either end of the line, it was just like riding behind a boat… but with no wake.  That’s the interesting part.  This was my first time riding this year and so I was happy just to be standing on a board.  I was running through all the flat water tricks in my head and tried several grabs and a couple of kick 180s that I was able to land; between all that and the slingshot turns at either end, I managed to wear myself out pretty quickly.  All that was well and good until some guys showed up that started doing raleys with NO FREAKING WAKE!  I was totally caught off guard… I had no idea you could even do that!  I talked to the owner of the place for a bit (who was VERY cool, by the way) about how you get pop with no wake.  I never got back in the water to give it a try… but you can bet I’ll be doing that again next time I’m in Szczecin!